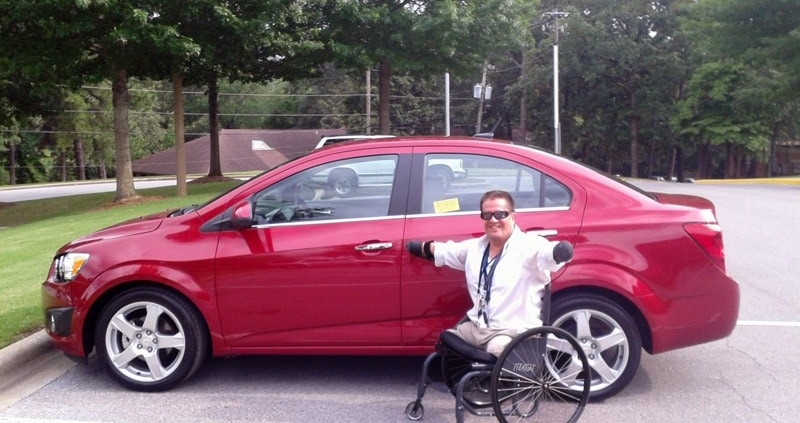 Bob Lujano’s journey from Texas to Alabama, Athens and Beyond

There is a scene in the Academy-Award nominated documentary, Murberball, when co-star, Bob Lujano, and his teammates, play a prank on an unsuspecting team support staffer. In short, it involves Lujano hiding himself away in an empty cardboard box, his teammates pretending it is too heavy for them to lift. Then, when the staffer offers assistance and tries to lift the box onto a hotel room bed, Lujano pops out and scares her to the raucous delight of the roomful of co-conspirators. The ensuing level of laughter not only adds another layer of humor to the film’s in-you-face reality, it also proves that when it comes to disability and assistance – the keyword being assistance – quad rugby players, even ones with no arms and legs, laugh in the face of accepting it.

Meet Bob Lujano. He is 51 now and recently retired from murderball, the sport more tamely known as wheelchair (or quad) rugby, after playing for 25 years. He has seven USQRA National Championships to his credit and had the 2020 season not been cancelled early due to corona/COVID, he very likely may have had eight. He was a long-standing member of Team USA earning international medals plus a Paralympic Bronze (Athens, 2004). On the court he was as fierce a defender as they come. Ask any of the top offensive threats from any country in the world what they thought about the competitive Bob Lujano and you’ll get looks of frustration and disbelief along with NSFW curses in languages you likely won’t understand but surely will recognize. Nobody in the wheelchair rugby world wanted Bob in their face.

Off the court, Bob’s story is worth sharing, too. Let’s start on January 6, 1979, age nine, when Bob contracted meningococcemia, a rare form of meningitis. To save his life, all four limbs had to be amputated. If you think losing limbs earned Bob a pity party, think again. Bob’s family and friends kept his bar high and Bob grew up more active, energized and motivated than most. Pre-Law at  the University of Texas – Arlington. Master of Science in Recreation Sports Management at the University of Tennessee. A position at 1996 Paralympic Games as the Venue Director of the City Hall East Project. Then the Lakeshore Foundation staff in November of 1998 where he spent more than a decade as a Recreation Specialist, developing and implementing recreation programs for kids and youth. Ask any kid Bob has ever counseled, taught, friended, or mentored what they think of him and you’ll get smiles and outpourings of love. Bob is now an Inclusion Specialist, a shift toward public policy and corporate plus non-profit compliance, working at Lakeshore’s National Center on Health, Physical Activity & Disability.

Bob starts by crediting the Texas Rehabilitation Commission with helping him get to where he is today. In addition to vocational training, the commission provides counseling, financial assistance, and job placement. Bob took advantage of as many opportunities as he could, right down to using their services to get his driver’s training, license, and first vehicle. By age eighteen, Bob was driving an adapted vehicle (an SUV) using arm and leg prosthetics, primarily walking with a cane. He chose the higher vehicle because it meant he wouldn’t have to bend his legs to enter and exit. Why didn’t he get his license and a car at sixteen? His Dad told him that when he got accepted to college, it would be time to think about it.

Now, more than three decades later, Bob has set aside his leg prostheses and uses a manual wheelchair. He drives a smaller, more user friendly and practical 4-door Chevy Sonic. Bob says modern technology is making it easier to plug in his iPhone for assistance, stay connected and safe, and enjoy being on the road.

As for his present system of enter and exit, Bob typically transfers into either the back or passenger seat, pulls his folded wheelchair in behind him, then hops into the front driver’s seat. He still uses hand controls and a spinner knob, contacting them with special arm prosthetics. His process is so efficient and fine turned that Lakeshore has a how-to video that features Bob behind the wheel. Yes, if you are wondering, a quadruple amputee can drive.

“My driving is one hundred percent the result of modern technology,” Bob says. “It’s both the technology in the vehicle as well as the technology of the prosthetics. Both have changed so much through the years and both continue to change. I’m grateful.”

As for the freedom and independence that comes with driving, Bob adds, “Driving is one of those number one things we all need in our lives. When every kid I come in contact with at Lakeshore turns sixteen, I tell them it’s time to get their driver’s license. Driving is everything. It’s freedom, it’s fun, it’s independence, and it’s practical. I learned all that a long time ago and still love getting behind the wheel no matter if it’s around home in Birmingham or back to visit family still in Texas.”

We can learn life lessons from Bob, too. “So much of living with a disability is mental,” he shares. “The support of family and friends can help so much, and looking to those who have been down the road before you for guidance and tips helps, too, no doubt. I’m open to anyone who wants to come up to me and talk about disability and I still learn from others.

“But it’s up to each of us, disabled or not, to learn that we have one body and it’s up to us to take care of it. We are alive and we are here for a purpose.”

Spend even a minute with Bob Lujano and you’ll agree, he has a heart of gold.

No Arms, No Legs, No Problem

When Bob Lujano was seventeen, he wrote down a list of things he wanted to accomplish in his life. Of everything he listed, the final two have just happened in the last five years – get married and write a book. Bob’s book, No Arms, No Legs, No Problem, chronicles his personal journey, something he considers himself fortunate to be able to enjoy and share. Told with a voice of gratitude, Bob invites others to live life with everything they’ve got. Find Bob’s book through Amazon. You can also learn more about Bob at www.noarmsnolegsnoproblem.com.